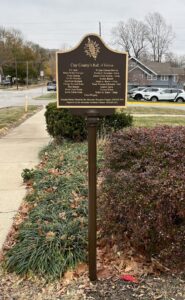 On February 22, 1919, the Alexander Doniphan Chapter dedicated an Honor Roll in memory of these nineteen men and placed it at the south door of the courthouse in Liberty. This hand illuminated Honor Roll was made by Robert S. Withers. The Chapter planned to replace this with a bronze tablet but unfortunately, due to a courthouse fire estimated to have happened in the 1930s/1940s, the Honor Roll was believed to be destroyed. This is the only memorial in the County bearing the names of those who died in uniform, in the World War.

On November 12, 2022, the Alexander Doniphan Chapter rededicated this plaque which is now located at 9 S Leonard St., Liberty, MO 64068, and honors the following men as listed on the original roll of honor:

J.D. Jack, a Navy soldier from Liberty, died in 1917 in Philadelphia of meningitis.

Clyde Gustine, from Excelsior Springs, 42nd Division, died on May 27, 1918, in France, from gas and wounds.

George Bernard Stone, from Liberty, killed August 10, 1918, on a quiet sector in Alsace.

Oscar Lloyd Evans, a Navy soldier from North Kansas City, died of meningitis on May 14, 1917.

Stanley Barnett, from Nashua, died November 18, 1918, in France from wounds.

Sparrel Harris, from Paradise, died of disease December 27, 1918, in Germany.